Glass-like substances occur naturally and have been used by humans for countless generations. The best known glass substance is obsidian, produced by the intense heat of volcanos, lighting strikes, and the impact of meteorites. Origins of the first manufactures glass are lost to antiquity (selecting the images will show an enlarged picture.)

It is thought that seagoing Mediterranean merchants accidentally combined a form of soda, sand, and limestone with their beach campfires and noticed the hard, clear substance left in the ashes.

Others believe that ancient man discovered fulgurites, hollow glass tubes formed when lightning strikes sand. Since they are hollow, waterproof containers, it may have given ancients the idea to use them as vessels. 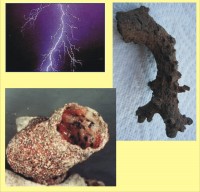 The image below shows two glass workers. One is using the blowpipe to form the hollow in the gather of glass. The other man is rolling the gather on the arms of the glassblower’s chair to manipulate the glass. 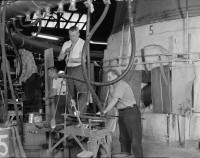 While glassmaking has been practiced since about 3,000 B.C. the concept of blowing glass through a blow-pipe to form vessels is credited to the Syrians. Authorities differ with respect to the date from the 3rd century B.C. to the 1st century B.C. The Syrian toilet bottle shown dates from the 1st to 3rd century A.D. While the form is Roman, it was found near Homs, Syria.

The Romans were known to refine the technique by making mold-blown glass.
The photo shows a Roman, free-blown, storage jar or Amphora, A.D. 200 to 300 (left). The other two Roman vessels are mold-blown, sprinkler flasks with spiral ribbing A.D. 200 to 400. 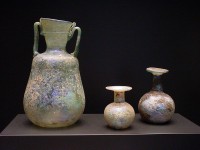 About the 6th century A.D. the Persians improve glass-making by the use of cutting designs into the glass with stone wheels and enameling. 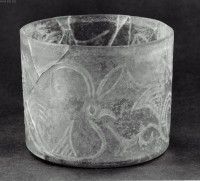 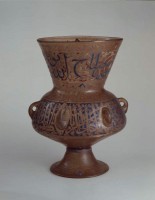 The master glass cutter below engraves a design in a wine glass, showing that the concepts of wheel-cutting and glass making in general has not changed over the centuries. 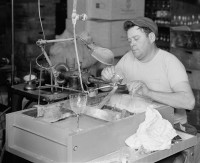