Marks on pottery and porcelain 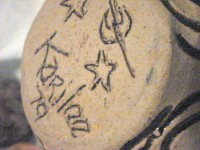 Not all antique and collectible pottery is marked. Since the identification of the manufacture can play a huge role in value, as a beginning collector, buying ceramics with a manufacturer’s name will make it easier to identify, date, and value various ceramics.

There are no laws governing marks on ceramics. In practice, most manufacturers changed their marks when they added or lost partners or family members, moved to new locations or introduced new product lines. Most books and online sources will provide a date range for when a particular mark was used by a specific manufacturer.

Learning how to look up a pottery mark takes a little understanding of how the various marks are arranged. Generally, they are grouped together by a basic form like crowns, animals, flowers, globes, etc. Each author has a slightly different system for organizing how the marks are arranged, but with practice, it becomes easier.

Some companies like Rookwood, used dating systems. They began using their reverse R & P mark in 1886 as the drawing shows. Beginning in 1887, they added a flame above the letters. Then after 1900 Rookwood they began using Roman numerals under the mark to indicate the last two digits of the year. The mark on the far right is for 1902. Note the II underneath the R & P combination.

It is important to note that the pottery and marks of popular companies have been copied and faked for centuries. Sèvres porcelain was so sought after that many prominent manufacturers copied both the Sèvres style and their marks. The interlaced double L’s were part of the cypher of Louis XV, although in practice, his cypher was flanked with an X and a V. The Sèvres double L’s included a date letter with an A representing 1753. An example is shown below.

This is the most common mark copied by fakers then and now, but Sèvres did not introduce a true porcelain (hard paste) until 1773. True porcelain is translucent whereby the light is clearly transmitted through the body as shown by the two images shown. The image on the left is a butter pat. The image on the right is the same butter pat with a light behind it. 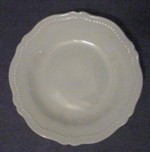 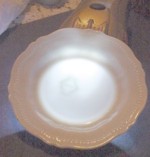 The conclusion is that marks on ceramics don’t tell the entire story. Always research those marks. One of the most popular books available is Kovels’ New Dictionary of Marks which can be purchased by following the link below. It’s a good beginning reference. There are other books for the more advanced collector as shown below.