Ivory in Antique and Period Jewelry

Long before the invention of modern plastics, jewelers used ivory in jewelry. Ivory in jewelry was popularized with Cook’s tours of the Paris Exposition starting in 1855. The Cook’s tours escorted English travelers to and from the Exposition, returning through Dieppe, an ivory carving center in France. Dieppe has been famous for ivory carving since the 17th century with 350 carvers at the height of popularity. Because of the rise of ivory’s popularity in jewelry during this time, we tend to date ivory jewelry no earlier than 1855. When combined with construction techniques and fittings, dating a piece of ivory jewelry becomes easier.

With recent U.S. bans on African ivory, it is important to make sure as much as possible whether or not a piece of ivory jewelry complies with U.S. regulations.

What follows are a few identification pointers. Ivory comes from the teeth of animals. A look at the picture below gives us our first clues as we notice that the tusk of mammoth fossil ivory curves more severely than modern elephant ivory. 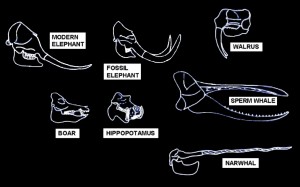 These curves can be seen in elephant ivory and mammoth ivory. They are called Schreger lines. 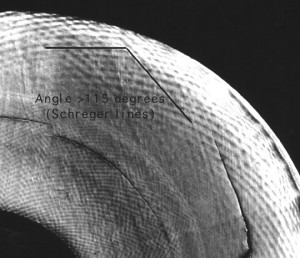 The Schreger lines intersect at angles less than 90 degrees in mammoth ivory. 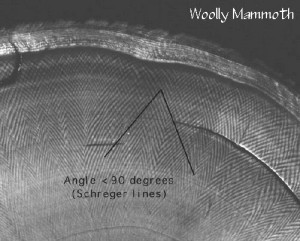 Only elephant and mammoth ivory have Schreger lines. The U.S. Fish and Wildlife Service has more information about identifying different types of ivory.